Groundhog Day 2018 except in our house!

Wow. I am not sure where to start up 21-10 feeling pretty good and then we just lose focus. We just do not lose focus but it is like someone ripped off our glasses, stomped on them and then we were Mr. Magooing all over the field and on the sidelines.

Magoo is copyrighted by whomever owns Magoo - I do not

Now there were some standout performances by a select few players but this is a TEAM sport and you win as a team and you lose as a team. No matter what that was one of the more poorly played games in the last couple years almost as poorly as....oh yeah this time last year in Baton Rouge.

Is it the end? Hell no! Get back up, dust off, this includes everyone in the Auburn Family and now make a run at this thing.... Of course we have to win out but hey we did it last year through the regular season! So we know we can do it. Bashing the coaches = no good, constructively criticizing through observations and data = maybe helpful. Being a Monday morning QB, doesn't show you are brilliant at all. Love Auburn, love our staff and players and be thankful. There are plenty of people this week with way bigger problems than losing a football game. trust me, this stings, even ticks me off and I will probably be salty until next week but in the end it needs to be put in perspective. Yes, this did sting.

Well here is how our ticket is looking. Do I think LSU is that good? no, do I think we played bad? Yes, and I will be doing some data analysis to prove it later on in the week. 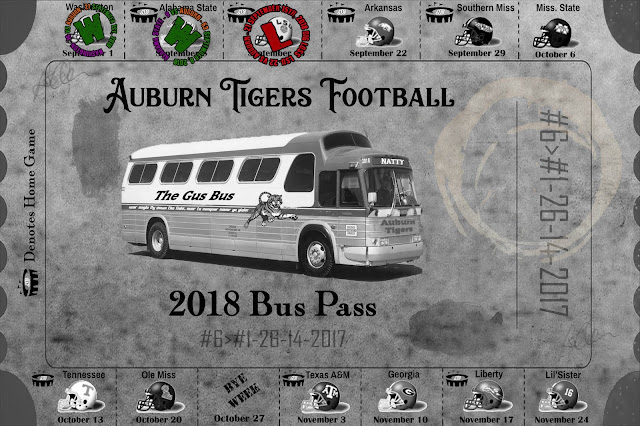 God Bless Y'all, War Eagle and we'll get'em next week!

Have a safe, peaceful week and please try not to assault any dumbA#$ bammers that are trying to be funny even though we know they are not.
Posted by Unknown at 7:12 PM