As expected, the Auburn/Florida Softball series this past weekend and Monday night was hard fought and it was evident that the rivalry against the Florida Gators is alive and well. Here are the highlights from Monday's game.

Auburn lost game one on Saturday 4-3. This game may have
been won by Auburn if not for a obvious bad call at home plate early in the game. The home plate umpire called the
Florida player out. Tim Walton, the Florida head coach, came out to protest that Carlee Wallace bobbled the ball prior to the tag and the call was reversed by an umpire in the field. The replay showed that the ball was clearly not bobbled and the Florida player was out. It was a great play by Carlee Wallace at the plate. I must say that I  have seldom seen an umpire in the field over rule a "tag" at the plate. Perhaps it is time for replay in Softball on plays that might decide the game. Of course, Auburn did have 3 key errors in the 7th inning and the game would have most likely gone into extra innings had it not been for the bad call. Kaylee Carlson pitched a solid game, but Auburn was not able to overcome the umpires or the errors.

Auburn lost the second game 7-0 and only had two hits. Kelly Barnhill, the Florida pitcher, recorded 16 strike outs in this game which was a season high for Auburn. By the way, Kasey Cooper and Kelly Barnhill play on the USA Softball National
Team together. I feel that both players are destined to play on the USA Olympic Softball team in 2020.

Auburn won this game 1-0 and Kaylee Carlson pitched well allowing only 3 hits. Her changeup was really working and the Florida players had difficulty timing their swings. Kaylee may have one of the best changeups that I have seen this season in College Softball. Kendall Veach hit what turned out to be the game winning home run in the second inning. Kendall is destined to be an all SEC Softball player.

Of course, this game was not without controversy and the rivalry between Auburn and Florida just went up another notch. Tim Walton and Haley Fagan had an altercation during the "high five" session at the end of the game. I would suggest that you watch the video and draw your own conclusion. I always felt that it would only be a matter of time before words would be exchanged between Haley Fagan and Tim Walton. As you may know, Tim Walton did dismiss Haley's two sisters, Sami and Kasey, from the Gator Softball team in 2012 due to what Kevin Fagan (their dad) called "an altercation on the team". Kevin Fagan is now the Softball coach at the College of Central Florida. Also, I do remember that he played for the San Francisco 49ers from 1986 to 1993 during the Joe Montana days. It does seem that the dismissal of Haley's two sisters was controversial and the altercation on the field last night was personal. Tim Walton did apologize to Haley today in a statement. I can only say that this series was hard fought and emotions were running high at the end.  The next meeting with the Florida Gators will be interesting to watch.

Auburn will now face Georgia this weekend. The first game will be at 6:00 P.M. CDT on Saturday.

A Day is coming!
Posted by Randy Comer at 2:35 PM No comments:


The competition for the starting quarterback job at Auburn has just become a bit more narrow.

In a tweet released today, Tyler Queen has announced he will transfer and seek to showcase his talents somewhere else. 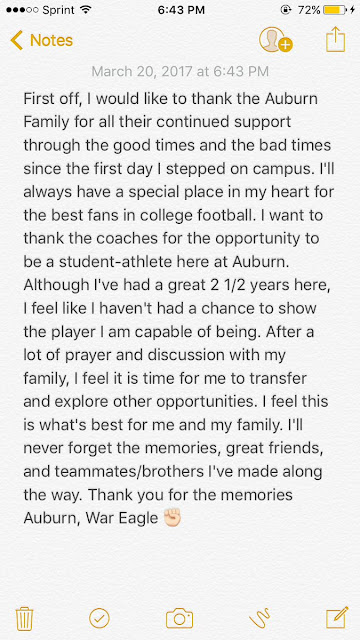 Tyler Queen's career at Auburn has been marred by injury, even before he stepped foot on campus Queen injured his elbow playing high school baseball after he signed with the Tigers.

We here at ATB wish Tyler the very best of luck in the future.

War Eagle!
Posted by AUTigerBloggin at 3:05 PM No comments:

A Look at Auburn Softball


Spring is here and it is time for a report on the Auburn Softball team. The Softball team just returned from playing in Florida and several program records were set. Kaylee Carlson pitched the second perfect game in Auburn Softball history against Ohio State (Auburn won 8-0) and Kasey Cooper became the second player in SEC history to have 250 hits and RBIs. Auburn is now number 4 in the USA with 27 wins and 3 losses and they will begin a difficult SEC schedule against the Florida Gators in Gainesville on March 25 at 6 P.M. The game will be televised on ESPN2. Auburn did play LSU earlier in the season and won 2 from the 3 game series. Some of the Auburn hitters to watch are Kasey Cooper, Carlee Wallace, Haley Fagan and Kendall Veach. If you are in Auburn this Spring, I would suggest that you check the schedule and come out to watch these girls play. If the stadium is full just come on out to the left field seats and tail gate.

Here are the highlights from that "perfect" game by Kaylee Carlson against Ohio State.

Here is a look at the "perfect" game highlights with Ohio State.
Posted by Randy Comer at 1:26 PM No comments:

Posted by AUTigerBloggin at 11:44 AM No comments:

Posted by AUTigerBloggin at 11:44 AM No comments:

Auburn's Bruce Pearl after losing to Mizzou at 2017 SEC Tournament

Posted by AUTigerBloggin at 5:27 PM No comments:

When asked on several occasions about QB's,


War Eagle!
Posted by AUTigerBloggin at 7:12 AM No comments: 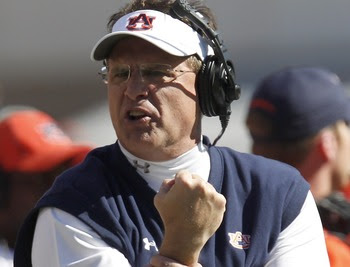 Not much hasn't been written about the QB competition at Auburn this off season. That won't stop me as I try to shed some light on who the real contenders are for the starting role of the new Auburn offense led by Chip Lindsey.

Gus Malzahn has been inconsistent in the years past naming a starter, and for good reason. Even after Nick Marshall left, naming Jeremy Johnson as the starter was a foregone conclusion. Name him Gus did, and that blew up like a terrible 4th of July fireworks disaster.

News flash! Gus has turned the offense over to Lindsey. If Chip feels comfortable naming a starter at the end of spring, that is when it will be done. Just don't look for it to happen.

I have a feeling Chip Lindsey will want to see what Sean White can do when healthy. If for no other reason than to have a clear #2 in place.

The wild card in my mind is Woody Barrett. I think this may be the best QB talent wise Auburn has drafted out of high school in forever.

Among the things Gus Malzahn mentioned about Woody Barrett, one stood out above the rest.

Gus said " Woody Barrett is the quarterback we have wanted and recruited since day one.

I love Tyler Queen too. Here is Queens bio from the AUfficial site:

If Tyler Queen can stay healthy ( sort of sounds like Sean White's line ) He could be in the mix too.

Unfortunately, that leaves John Franklin III out of contention as far as I can see. Unless Franklin has made tremendous strides in ball security, ball placement while passing, and decision making, he will not be in the QB rotation come summer workouts.

With my record for less than accurate forecasting, all of this just hyperbole. But it is wonderful to be talking about football at Auburn.

WAR EAGLE!
Posted by AUTigerBloggin at 2:02 PM No comments: