Posted by AUTigerBloggin at 11:19 PM No comments:

Posted by AUTigerBloggin at 11:13 PM No comments:

Posted by AUTigerBloggin at 10:58 PM No comments:

Posted by AUTigerBloggin at 10:56 PM No comments:

Posted by AUTigerBloggin at 10:55 PM No comments:

Posted by AUTigerBloggin at 10:54 PM No comments:

This is not something I intend to do every Friday. I do however have fond memories of my days at Track Em Tigers, and this was my usual slot, so without further delay....

Auburn Gymnastics...
This is a really neat look at the facility our Tigers use. Just click this link and enjoy.


College Football...
Last night we had all our dreams come true. The start of another college football season has begun, and unfortunately will be over way too soon.

There is an age old coaches motto that goes something like "If you didn't play play well enough to put the game out of reach, then you can't blame the officials for costing you the game" Last night was certainly an example of this axiom being as true as life.

Not once. Not twice. Three times. On three drives in the first half Vanderbilt had the ball on the South Carolina side of the field, and came away with zero points. Nada, zilch! Had the Commodores been able to execute those drives into field goals, they win the game.

The referees certainly blew an opportunity to get more TV time though. As evidenced by these two pics from @AUZoom  The first picture shows clearly that the USC defender was pulling the arm of the Vanderbilt receiver downward. 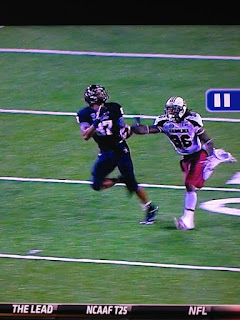 The second picture shows the ball was still in the air, while the pass interference was being "applied", and leaves no doubt that this was a penalty that should have been called. 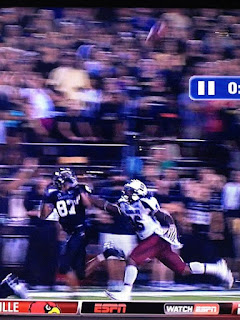 You must play well enough to not allow the game to be decided by the men in stripes. I certainly hope the Auburn football team was watching, and came to this same conclusion.

Your thoughts and comments are welcome.

My Take...
We are embarking on a new chapter of Auburn football. Changes in philosophy on both sides of the ball were needed and welcomed by most fans. While we will never forget the contributions of Ted Roof and Gus Malzahn and their intricate roles in bringing a National Championship to Auburn, it was time for a change.

Championships are in Auburn's future regardless of what anyone else may tell you. Maybe it doesn't happen this season, maybe it does. Until the games are played it is all just banter. One thing is sure, barring a string of major injuries, this Auburn team will be much better than the media has predicted. I for one can not wait to see the start of 2012 Auburn football.

Breaking Down The Tigers: 2012 Starters on Defense

In an earlier post, we took a look at the starters on offense for Auburn in the upcoming season opener this Saturday against Clemson. Today we will turn our attention to the defensive side of the ball. So, let's get to it.

When Brian VanGorder arrived at Auburn he promise that everyone would have to start over and earn their job. That meant some new faces would be seen in some areas of the team, and that even the true freshmen would be able to compete for a spot in the rotation.

On the defensive front you will see a lot of familiar faces. Many of these guys have played, and or started for the Tigers in the past two seasons. The most surprising item to note is that Nosa Eguae, who sat out the spring with an injury is listed as third string at both sides of the defensive end position.

Once again we will use the rivals.com rating system to show the projected potential these players were thought to have coming out of high school. The roster looks like this:

All together Auburn is returning 9 players on defense that at least played during some games last season. That game experience will bode well in many respects. Learning a new system and applying the new concepts in the heat of battle will be much easier for the players that have previous game time. Leaving the the two others who have very little experience with someone close by to guide them along.

I look for the Tigers to be much improved in tackling, and reading what the offenses throw at them during each game. Therefor leading Auburn to a much better defense overall.

The star power may not equal that of the offensive side of the ball, but it makes up for it in game experience, and that has much more potential for a successful season.


Posted by AUTigerBloggin at 9:51 AM No comments:

On Saturday night, with a full house watching, The Auburn Tigers and The Clemson Tigers will take the field to kick off their respective 2012 seasons. This is my take on the game based on reading different publications and stories about each team.

Auburn enters the contest with a lot of unknowns. A new starting quarterback, a new stable of running backs since the departure of Mike Dyer and a revamped offensive line. There is a great deal of talent there but it is as of yet untested and unproven. Sophomore Kiehl Frazier takes over the starting spot at quarterback while Onterrio McCalleb will be called upon to lead the trio of running backs that look to carry the load for at least this game. The offensive line is big, quick, and very athletic. The only problem here seems to be experience or a lack of it. The Tigers will get their fair share of experience on Saturday night and will need to grow up quickly to be able to establish a running game in order to open up the passing game for Frazier and his receivers. The ability of the O-line to create space and also give Kiehl time to throw will dictate exactly how effective the offense will be on the night.

The strength of the Tigers from Auburn should be the defense. Well, at least for the first part of the season. The front 7 should be able to dominate most teams as they rely on their strength and quickness to apply pressure. The defensive backs should be much improved over past years as the talent level on the Plains has risen greatly. The front 4 must get a tremendous push towards the quarterback to give the linebackers a chance to make plays. They must also be sure tacklers in the backfield; something that was missing last year as the defense struggled in the running game, especially on third down. The linebackers MUST make plays when they are supposed to do so. Missed tackles cannot plague this team this year. Last year missed tackles led to extra series for opposing teams and in turn wore the defense down resulting in too many blowout losses. The defensive backs will be much improved and could end up being the strength of the defense by years end.

The other Tigers will be led by quarterback Tajh Boyd but for this game will be without returning superstar wide receiver Sammy Watkins. Their O-line is very much like Auburn's in that there is a lot of youth on the line. It has been stated that as many as three true freshman could find playing time on the offensive line Saturday night. The defense will be playing under a new coordinator this year as Kevin Steele is out and Brent Venables is in. See what giving up 70 does to your job security? The defensive line is replacing 3 starters the linebackers have been weak the past two seasons and the defensive backs have had too many breakdowns over the past couple of seasons to be considered with the top secondaries in the country. The new defensive coordinator should help but that's a lot of problems and inexperience to overcome.

It appears to be strength versus strength in this game. Auburn looks to have the better defense and Clemson with a slight edge on offense. The edge would be bigger if Watkins were playing but that is just not the case. In the end it is said that defense wins championships so that is where I will go with this game. The Auburn defense simply overpowers the Clemson offense and Auburn scores just enough points to win.

Look for Auburn to hit the mid 20's while keeping Clemson under that mark. in the end let's call it

Posted by AUTigerBloggin at 10:51 PM No comments:

Breaking Down The Tigers: 2012 Starters

A lot is being made about the starters on Auburn's recently released depth chart being young, and somewhat inexperienced. Let's break this down, and see if there really is anything to be concerned about.

First I want to state that as far as the running backs, and wide receivers go, there is little change except maybe Trovon Reed being named ahead of Travante Stallworth. Stallworth as you may recall was the starter last season. Then he suffered an injury that slowed him throughout the rest of the year. Reed has been a promise waiting to be broken.

Recently however we have learned that Trovon Reed has gained some much needed weight without losing any of his breakaway speed. A great piece of news. We hope this means he will be more healthy through the season ahead.

The running backs are what we saw against Virginia in the Chic-fil-A Bowl game in January. With the added depth of Mike Blakely and Cory Grant, Auburn should be in great shape for 2012. That is a huge plus.

These are some impressive ratings. My guess is that this will be the most highly rated combined starting lineup at these positions in Auburn football history.

Looking at the offensive line we see that the stars are much the same. It is worth noting that Auburn has consistently landed among the top offensive line classes in the country in the past two recruiting cycles. Evidenced by the ratings of the backup at each position.

Quality abounds in the trenches on the attack side of the ball for Auburn.

Tomorrow we will look at the defensive side of the ball, and the starters for the opener against Clemson. Until then...

Posted by AUTigerBloggin at 8:11 PM No comments:

Here is a video courtesy of al.com featuring Chad Slade.

Posted by AUTigerBloggin at 4:58 PM No comments:

A really big THANK YOU goes to AuburnSports.com and Justin Hokanson for the following.


Posted by AUTigerBloggin at 11:35 AM No comments: