A Special Senior Thanks- Basketball 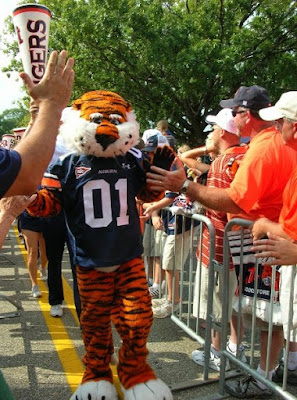 So, I always do a senior thanks for football, basketball, baseball and softball. I usually tend to say a lot of the same things. Sometimes, I feel like I get to know a player a little more through their activities or social media and then I might have a little more to say. This year for basketball, there is only one senior. He does not say a bunch. He does not use social media a ton. However, it is very easy to say good things about him.

Patrick Keim. What an Auburn man. He was a walk-on. He gave us much joy the year Auburn had such a run in the SEC tournament. Much of the team graduated or left. Patrick stayed. He earned a scholarship during the year where almost everyone fell in love with Auburn basketball. No one deserved in more than Patrick. I cannot even begin to understand the journey of the walk-on athlete. They play for the love of the game. (I am not saying that scholarship athletes do not love the game)

When I think of the Auburn Creed, he is one of the first athletes to come to mind. I do not know what he is planning for his future as far as his career or school goes, but I do know that he will be successful.


Patrick, thank you for your dedication to Auburn basketball. It was because of guys like you that Auburn was able to make it to the big dance this year. It was a joy to see you get to participate in see something you dreamed of years ago. Thank you for always doing the right thing and for being the leader you are. I know whatever you do will be successful. We will miss you a ton. Please keep in touch with your Auburn family. You will always have a home with us at Auburn. Thank you for your dedication to Auburn University and the Auburn family.
War Eagle!
Posted by tatershell at 8:35 PM No comments:

This week has been a very important one for coach Bruce Pearl and the Auburn Men's Basketball program.

Coach Pearl received endorsements from both the Auburn University athletics director, and Steven Leath, the university president in the last week.

Speculation had run rampant among the fans, especially since there had not been any public display of support for Pearl.

Leath allowed Alan Greene ample time to become familiar with the overall situation involving the basketball program, and the ongoing investigations by both the FBI and the NCAA.

*From SEC Country/Auburn: Speaking Wednesday morning on WJOX’s The Roundtable, Greene stayed firm in his belief in Pearl, stating that barring any new and unforeseen information from the FBI’s investigation into money corruption in the sport of college basketball, his plan is for Pearl “absolutely” to stay on board as the Tigers coach.
“Bruce feels like he’s done nothing wrong. He and I have talked about that and I don’t have a reason to do anything other than what we’ve been doing: supporting him and his student-athletes.”

This public display of support, under the current situation, has many positives for Pearl, and Auburn Basketball. Recruiting current players to hang around, and bringing new talent are just two. It should also relieve any angst the fans may have about the path moving forward.

Bruce Pearl has thrown himself into the fabric of Auburn University. Becoming involved with its students, former players, and alumni. Pearl has become an advocate for Auburn, and its many endearing qualities Auburn men and women hold dear.

It's no secret Bruce Pearl is a fan favorite.

WAR EAGLE!
Posted by AUTigerBloggin at 9:10 AM No comments:

In what has become a lopsided series, Auburn baseball easily handled Alabama 5-2 for the 9th win in the 10th Max Capital City Baseball Classic.

Jay Estes made three outstanding plays in center field. Unfortunately, there isn't any video to share with you.

The Tigers improved to 21-5 on the season and are ranked number nine in the country. Alabama fell to 16-10.

Posted by AUTigerBloggin at 7:16 AM No comments:


Auburn Track & Field competed in the NCAA Indoor Championships, and did so rather well.
The Men finished 8th and the Women inside the Top 20. Read more about the competition HERE.

Of course the big news centers around Auburn Basketball, as it starts practices in San Diego, CA in preparation for the NCAA Tournament.

Coach Bruce Pearl had the team go through some "more physical" practices this past week. "We weren't playing good enough to advance....Tuesday's practice should fix that" Pearl told the media.


Auburn Baseball continues a hot streak as they put 12 runs on the scoreboard against Georgia Tech Tuesday evening at PLainsman Park. The 14th ranked Auburn Baseball Tigers improved their season record to 16-1.

Auburn Softball turned things around against Southern Miss this past weekend. After dropping the series against LSU last week, Coach Mickey Dean and the ladies, righted the ship with a double header, winning the first game 9-2 and then shutting out the Golden Eagles 5-0 in the nightcap. It was the 17th shutout of the season for the 10th ranked Tigers who improved to 25-5.

The 18th ranked Auburn Women's Tennis team continues firing on all cylinders. Coach Lauren Spencer's squad defeated Ole Miss and Alabama A and M this past weekend to improve to 15-5.


Posted by AUTigerBloggin at 7:51 AM No comments:


Tuesday the SEC and its coaches announced the post season ALL-SEC TEAM. To the shock of many, and the ire of most Auburn fans, history was both made, and ignored.

For the first time in the history of All Conference Team nominations, not one first place team player made the first team selection.

**“I’m disappointed for the first time since …1956 was when they started putting on first- and second-team All-SEC (teams) and there’s never been a regular season champion that didn’t have a player on the first-team until this year,” Pearl said Tuesday afternoon in a media conference.

From where I sit this Wednesday morning, just hours away from the start of the SEC Basketball Tournament, I can't help but wonder, why?

Why would the coaches break tradition? Why is this Auburn team being shunned? Even if the other coaches hold past grievances against Bruce Pearl, why vote against his players too?

It seems to me that just earning your way onto lists for postseason accolades is not enough. The voters, in this case SEC coaches, have to make some sort of statement with their vote, instead of remaining neutral.

The AP seemingly understands that a conference can't have a first place team without at least one player being selected as All-Conference first team.

**- From the Montgomery Advertiser
***- From the Washington Post
Posted by AUTigerBloggin at 5:29 AM No comments:


That feels very good to say and type. For this team, after so much turmoil and adversity, to play its way to the championship title of the SEC regular season, is something I pray I never forget.

Without going into all this team has overcome, watching them draw closer together and fight for each other was sheer joy.

Thank you Coach Pearl. Thank you coaching staff and all those behind the scenes for all you've done. Most of all, a large THANK YOU to all the players. Every single one of you.

The SEC Tournament starts Wednesday. The Championship game will be Sunday. Below are the times, and dates of each game via Sporting News.

Posted by AUTigerBloggin at 6:41 AM No comments:


Hello again, and War Eagle everybody!

We start out day with a shout out to the Swimming and Diving teams. Auburn has had Nine women selected to the National Championships which start on March 5th, in Knoxville, TN. If you are anywhere near there, go support our Tigers!

It's officially March, and most of our Auburn sports teams are in full swing.

Men's basketball ( 24-6 12-5 ) is getting ready for its last home game of the season. They will play host to South Carolina. Here's to sending the Gamecocks home with bruised egos. A win assures our guys at least a share of the regular season SEC Title.

Auburn softball ( 17-2 ) will be very busy from the 2nd through the 4th. Playing no less than six games while hosting the Wilson/DeMarini Classic.


Women's Tennis will match up against Vanderbilt, and Kentucky on the 2nd, and 4th respectively.

Spring practice has begun for our football team. Lots of work to be done, and several positions to sort out. More on this in a later post.

A-Day will be April 7th at JHS. The game starts at 3pm.

Posted by AUTigerBloggin at 7:55 AM No comments: