Giving Thanks- Football, Family and Friends

It is almost Thanksgiving, so its almost time for the Iron Bowl, the most wonderful time of the year.  I've read lots where people try to explain the Auburn/Alabama rivalry to those who do not live in the state. I am not sure that is possible. I was followed and "yelled at" by an old lady in the grocery store today. One thing I have often read is that when a child is born in the state, he or she must declare their loyalty to a school. Family history definitely plays a major role in this choice.

I've been an Auburn fan my entire life. My parents met at Auburn. When I was really little, we lived in Florida but I do not remember any trips to Auburn from that time. We moved back to Alabama when I was five. My parents grew up in Anniston and Gadsden but when we moved but, we moved to Semmes, which is outside of Mobile.  My grandparents that lived in Anniston went to lots of games. They eventually bought season tickets. Once a year, we would get tickets and drive up from Mobile. My grandparents would get a good parking spot and would "save" us a spot. My aunt and uncle came over from Birmingham.  We usually ate sandwiches out of the trunk. If you have been around Auburn a long time, you might remember that there used to be a tiny lot in front of Haley Center. That is where we would park. This was when the eagle cage was on the lawn and I would always go "pet the eagle", even if it did scare the crap out of me.  My dad worked at Anders while he was a student, so we would always walk over to Anders. We would get a "game day" shirt and get our faces painted with a paw print. If you've really been around Auburn a long time, you might remember the basement of Haley Center had a cafeteria, and we would sometimes get to eat there. My grandmother always got Maryland Turkey. I have NO IDEA what that is now, but I remember my grandmother eating it. When the game started, we all split up. My aunt and uncle had seats in the corner where they are adding on right now, our seats were in the other end zone, and my grandparents had the primo 50 yard line seats. Where the seats were did not matter at all. It was the time with family that meant so much to us. 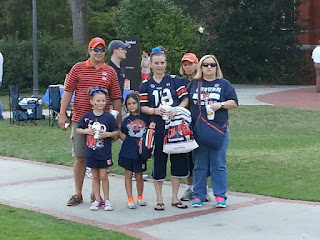 My immediate family- except my dad who is taking the picture.

One distinct memory that I have shared a few times is the 1983 season Sugar Bowl. We all went to the game. I was in 2nd grade. After the game, my parents drove me back to Mobile and made me go to school the next day. My sister was not in school yet, so she got to stay in New Orleans with my grandparents and aunt and uncle. That is typical of being the child of teachers! (This is the game where my football superstitions began, but that is another story altogether) 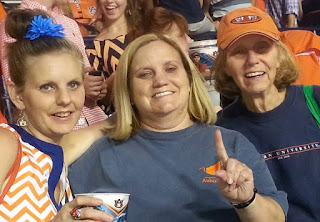 My mom, sister and I in 2013. This game was early in the season so I had no idea we'd play for the national title.

For me, Auburn football is more than a game. It is family to me. As my sister and I got older, we were not able to attend games all together. My grandfather died right after I graduated from high school. My grandmother still went to some games. My uncle went to games too until his health got really bad.  My uncle died during the 2010 season. He died the day before the Ole Miss game that year. For years, we kept my grandparents' tickets, with the assistance for a great friend my grandfather made while they were attending games. We would take turns going to games which gave us a chance to share Auburn with our friends. I have several friends who have attended games with me. Some were already Auburn folks but no one I ever took did not become a fan of Auburn. After my nieces were born, we started going once a year with everyone, including the twins. Some of those trips have been harrowing but ALL have been wonderful memories. My sister and brother-in-law got to attend the Kick-Six. 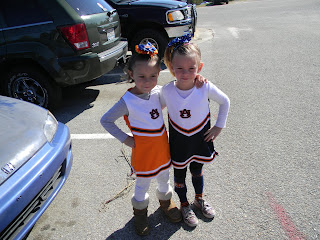 These two never had any other choice.They were preemies. The one in blue weighed 2.6 pounds and the one in orange weighed 3.7 pounds. They were in the NICU for a while. We had little tiny stuffed Aubies hanging in their isolette, so they never had a chance for anything else! I am especially thankful for these two. 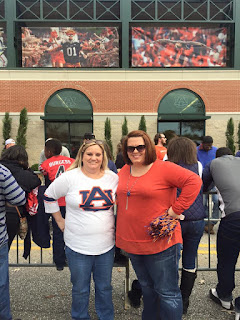 My best friend, Regina and me. She has gone to many Auburn games with me. Now she lives in Alabama so she roots for us. 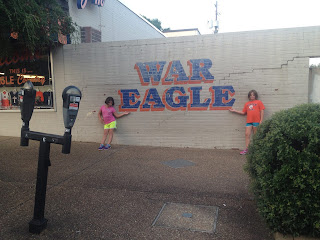 Emma and Ella at J & M in summertime.


It wouldn't have mattered that my entire family was Auburn before I was born. I think it is the team I would have chosen anyway because I am Auburn...and I am forever thankful.