How Special are the AU Special Team Units


Punt Returns –
In the past 8 Seasons, Auburn has only had 2 seasons where we returned a punt for a TD. In 2014 we returned 2 and 1 in 2013. With the lack of returns yardage and TD's it is easy to conclude that this has not been a strong part of Auburn's game for some time and maybe just not the coaching staff's focus. 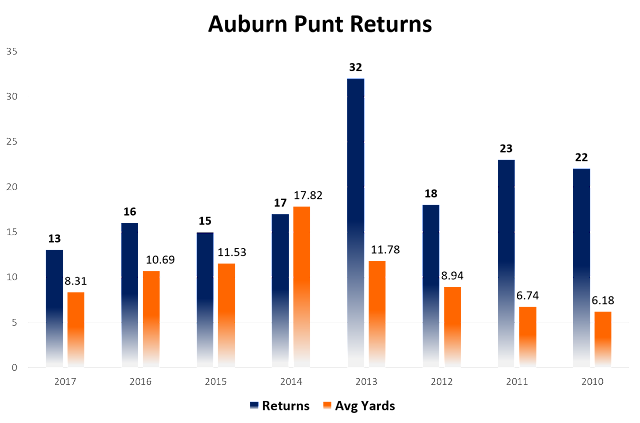 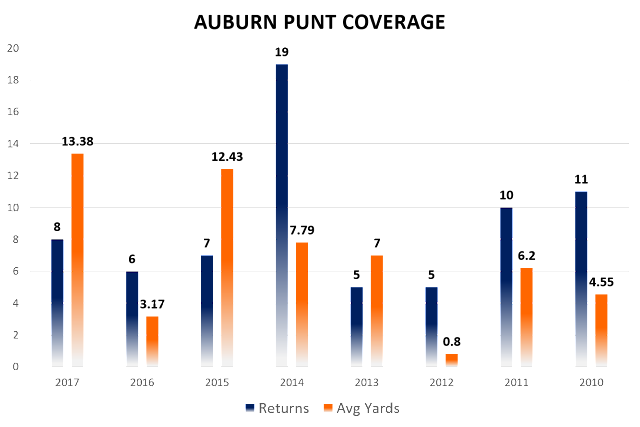 
From 2010 – 2013 Auburn returned 6 Kickoffs for a TD. Since then Auburn has not returned a Kickoff for a TD in the past 51 games. The good news is we are averaging 24.75 yards on the 12 Kickoffs this year we have returned. The bad news is… our opponents on 8 returns are averaging 29.88 yards per return with one TD. Auburn has only given up 3 Kickoff return TD’s in the past 100 games and the most Kickoff TD returns in any year was 1 so let’s hope that the Arkansas return is out of our system with the Arkansas TD.

Punts –
Again, there is some good news and some bad news. First, the good news, we are only averaging 3.5 punts per game. The bad news is the average is at 39.36 yards on 28 punts. The only other time we averaged below 40 yards in a season was the 2010 Season where we won the Natty. Now we can spin this but watching the games this year we do lack that field position changing punter. On the other side though due to our dominant defense the opponents have punted 55 times and averaged 41.55 per kick.

Kickoffs –
Legatron is the bright spot of this special teams units as would be expected. His whopping touch-back percentage is at 84.48% 58 total kickoffs, 49 touch-backs and …oh yeah one of those went out of bounds we can forgive him for that 😊 It should be noted though back in 2015 we did have 3 get kicked out of bounds. The next stat really puts into perspective just how good our defense really is. Our opposition have only kicked off to us 29 times with 16 touch-backs at a 55.17%. Legatron at this point is #1 in average yards per kickoff @ 64.78 and his 49 touch-backs are also the most in the country. 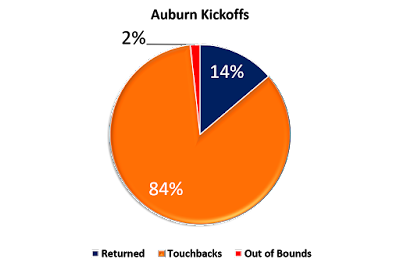 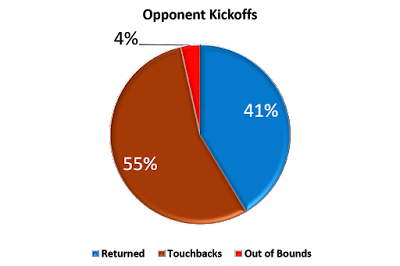 Place Kicking –
Finally, to finish off with the best part of the Special Teams Unit we continue with Daniel Carlson and the place kicking. 176 Extra points in a row! That is right Auburn has not missed an PAT in 47 games. This year so far Carlson is 15 of 19 for a modest 78.9% for Field Goal %. His past two years were 87.5% and 85.2% respectively and his Freshman year was 75%. An interesting fact though is Daniel is 6 of 10 inside Jordan-Hare and 9 of 9 away from Jordan-Hare. His 4 misses are 53 and 46 yards against GA Southern, 26-yard FG vs Mercer and a 51-yarder vs Mississippi State. Carlson is currently 10th in scoring with 80 points. He also became the All-Time SEC scoring leader this year and continues to pad his legacy which is at 434 points as of this article. 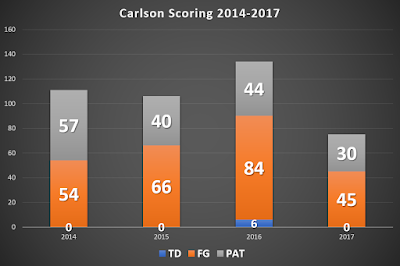 Hope you liked the stats - all in all we have work to do in the punting and the coverage and return units but we are solid with Daniel Carlson doing what he does....

Wouldn't these be nice for a Christmas Lamp this year? 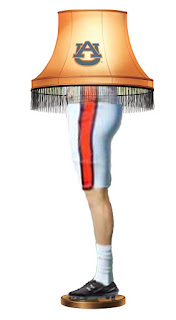 War Eagle y'all and always interested in hearing your thoughts on the stats thoughts.
Posted by Unknown at 11:25 PM