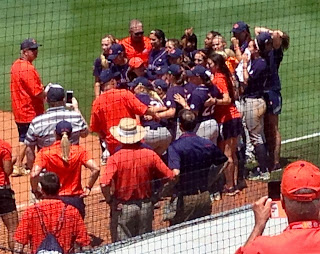 After winning a historic Regional and Super Regional, the Auburn Tigers Softball team is now headed to Oklahoma City to play for that coveted “World Series” ring.

They will play the LSU Tigers which they did face in Baton Rouge winning 2 out of 3 games. It will be double elimination  and a best of 3 games in the Championship Series.

Auburn will begin their journey at 1:30 P.M. CDT  this Thursday on ESPN. If Auburn wins the game with LSU, they will then face the winner of the Florida/Tennessee game on Friday at 6 P.M. CDT.

Auburn has not played the Gators this season so I would look forward to a game between these two teams.

I am expecting a close game between Auburn and LSU. It will be the fourth appearance in the World Series for LSU. They appeared in 2001, 2004, and 2012 and lost. The LSU girls are coached by Beth Torina who was a pitcher for the Florida Gators from 1997-2000.

I expect most of the pitching to be handled by Allie

Walljasper with middle relief coming from Carley Hoover. LSU has

named Sandra Simmons. She had 5 RBIs in the win over Arizona

have some of the best hitters in the SEC. Some of the Auburn

and Jade Rhodes. The pitching duties will be handled by Lexi

calling the signals behind the plate.

Clint Meyers and his staff has done a remarkable job turning

around the Auburn Softball program and they will be even better

It is possible that Auburn and Alabama could play for the

Championship and a historic World Series win over Auburn’s

biggest rival would be a great entry for the record books.

check out the Bar-B-Q.