The Greatest Comeback in the Women's College Softball World Series 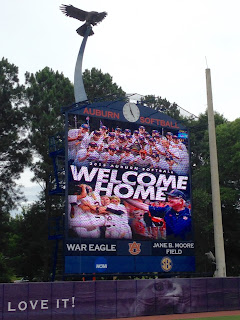 As you know by now, the Auburn Women's Softball team defeated Oklahoma 11-7 in another wild finish. I had barely finished eating dinner last night and Oklahoma already had a 7-0 lead over Auburn by the 2nd inning. Oklahoma scored 1 run in the first inning and added 6 more runs in the top of the second inning.


Auburn began their incredible comeback in the bottom of the 2nd inning. Oklahoma decided to go with a right handed pitcher, Kelsey Stevens instead of their ace, Paige Parker who had pitched every game in the post season.


Auburn began their incredible comeback in the bottom of the 2nd inning when Whitney Jordan hit a 3 run home run and Victoria Draper singled in a run. Auburn tied the game in the 4th inning after a two run blast by Kasey Cooper.


In the top of the 6th inning, Shay Knighten of Oklahoma hit a deep ball to left field and Tiffany Howard reached beyond the fence and came up with the catch to save 2 runs.


Makayla Martin came in to relieve Rachel Walters in the 7th inning and allowed just 1 hit for the remainder of the game.


Emily Carosone came up to bat in the bottom the 8th inning with the bases loaded and hit a grand slam home run on the first pitch that was in her zone to end the game 11-7 in favor of Auburn.


Auburn now has one more game to play to take the Women's World Series crown. I do expect Oklahoma to start their ace, Paige Parker and Auburn will continue to use their pitching depth. I feel that it will be an exciting night for this Auburn Softball team and a chance to go down in the Auburn record books.


Play well tonight ladies and get that ring! I hope to see you all rolling the tree at Jane B. Moore field when you do return.