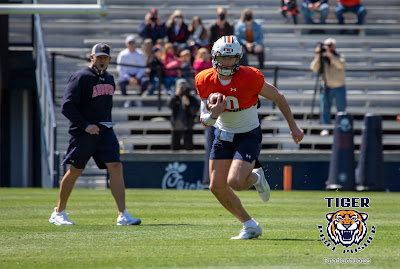 I decided to give this idea time to stew. Like any stew, the best flavors don't come by instantly mixing every ingredient, and turning the stove eye on. Some things take time.

I use this to help you understand why it has taken so long to write about T.J. Finley and his transfer to Auburn.

Understandably, there are many "what ifs"  and many more predictions about the situation. Most are guessing. They have zero ideas as to what's going on inside the athletic complex. I'm sure several have guessed correctly, still, it does not mean they "Know" anything.

I'll go over what I do know. Then we can talk about the "what ifs."

It was VERY CLEAR Auburn did not have a lot of QB competition at the starting QB spot. It has been Bo's job since he stepped on campus. Talk about pressure! 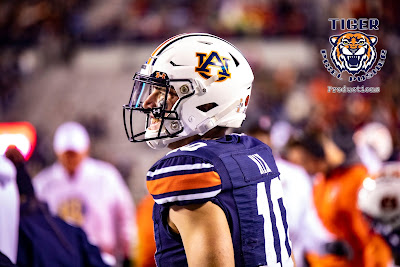 Bo Nix certainly has the competitive fire to be great.

The gap between Bo Nix and Dematrius Davis is wide. It's not a talent gap, it's an SEC game experience gap. After all, Davis just arrived at Auburn.

Here is a snippet from Davis' bio on the official website: Outstanding dual-threat quarterback who led North Shore High to a 14-1 record and the state semifinals in 2020 … 3,553 yards passing with 38 TD and 875 yards rushing with 22 score

It's worth noting these numbers were achieved in the highest echelon of Texas high school football. Enough said.

I am not going to discuss the other QB's that are in the room because they have very little chance of seeing action this season.

SEC game experience. This is the main reason Auburn went after T. J. Finley when he entered the transfer portal. Finley has tremendous upside and elite arm strength. Two more factors that made Finley a great target for the Auburn Tiger QB room.

These are my thoughts. They are not known quantities, but just my personal opinions and guesses.

Nobody on the current coaching staff cares who starts for Auburn at QB. They want the best guy to prove it's his team.

Bo may have the highest upside of any QB other than the two currently in the NFL.

There is a caveat. None of the QB's recently recruited out of high school made significant improvement year to year. Including Bo.

For some QB's it takes a couple of seasons. Their bodies are still growing. The strength and conditioning programs are unlike anything they have done previously. Then there is coaching.

Finley was thrust into the starting role at LSU as a true freshman. Usually, this is not a recipe for success. It wasn't. It was not a failure either. Finley had some very impressive moments that should translate well to the new Auburn offense.

If Auburn for some reason had to start Dematrius Davis, it would not be an ideal scenario. Over the years, very few true Freshman QB's have played at a championship level.

However, Now Nix, Finley, and Davis have proven QB developers in their corner.  Hopefully, we see major improvement this upcoming season.

The big plus to this comes from knowing the best teams have a QB ready to come off the bench and keep the championship drive alive. For example, Ohio State used three QB's one season they won the BCS Championship.

Adding Finley was good common sense and a prudent move. If he wins the starting job, good on him. If not, he will be ready whenever Nix decides to take his game to the next level.

Posted by AUTigerBloggin at 3:09 PM