My note to OUR Auburn MBB Team, thank you!

The morning after... It still stings. I feel terrible for our players. They earned an opportunity & for whatever the excuse they were not afforded it. Like so many others have said, this is life. They are Auburn men and thus I know they will have more opportunities. It's who we are. It does not make it right; it does not mean we should ignore it. It only means that we as Auburn men and women rise above it. We do not let any single person, group or event define us or limit us from reaching our goals.

This team was amazing. There is no other word for it. After a three game losing streak in February, of course the negative nanny’s were on fire on twitter. I have chosen not to go and pull those tweets as looking in the past at that type of brainless, easy, shallow rhetoric never matters much anyways. It only serves the person who tweets against our Auburn athletes, coaches and staff some type of false validation. The true Family, supports, believes, defends and loves Auburn.

This team chose to ignore the smoke and focus on what they knew they could do. They felt compelled to take care of some unfinished business after exiting the NCAA Tournament the year earlier suffering a blow out loss to Clemson and that drunk looking Tiger of theirs. 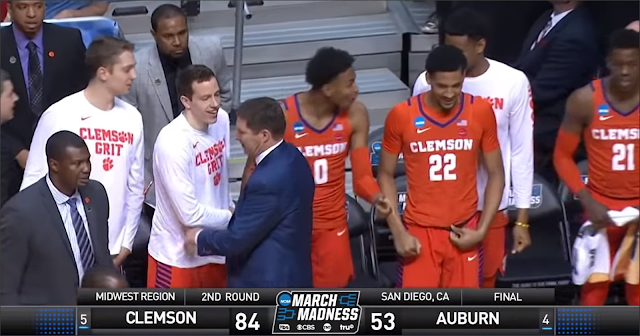 One team returned the next year and the other one didn't. Our Tigers had an epic run not matched before in history, for the simple fact no team in tournament history has beat Kansas, North Carolina and Kentucky in back to back to back games. None! Spreading that blue blood all over the NCAA tourney floor. 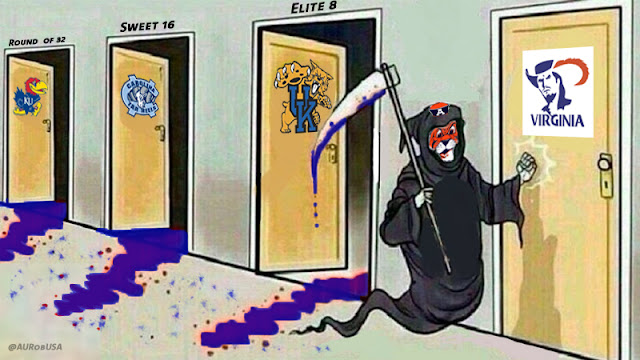 Our team; led by our seniors Malik Dunbar, Horace Grant and Bryce Brown followed by Jared Harper, Anfernee McLemore, Danjel Purifoy, Chuma Okeke, Austin Wiley, J’von McCormick and Samir Doughty got the bulk of the minutes over the end of February and an absolutely perfect March that had them practicing in April for a Final Four Semi-Final game! 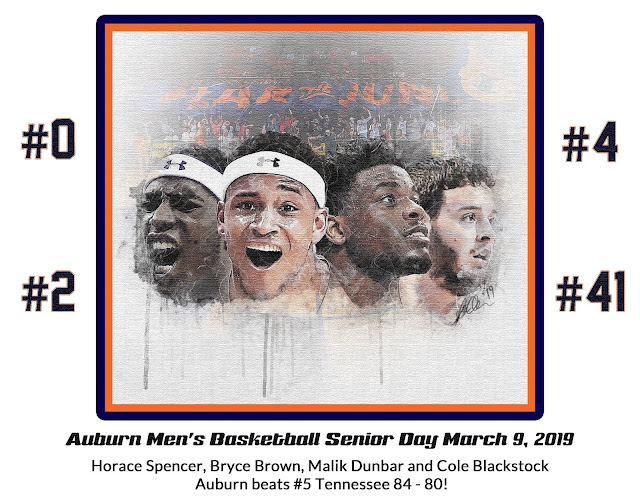 Wow, just wow! I was a coach once or twice and I know that Bruce Pearl who deserves more credit then the rest of the college sports world is giving him has to be amazed and proud of what he guided these Auburn men to achieve. I said perfect March! Look at this schedule and all of these games are “W’s”! 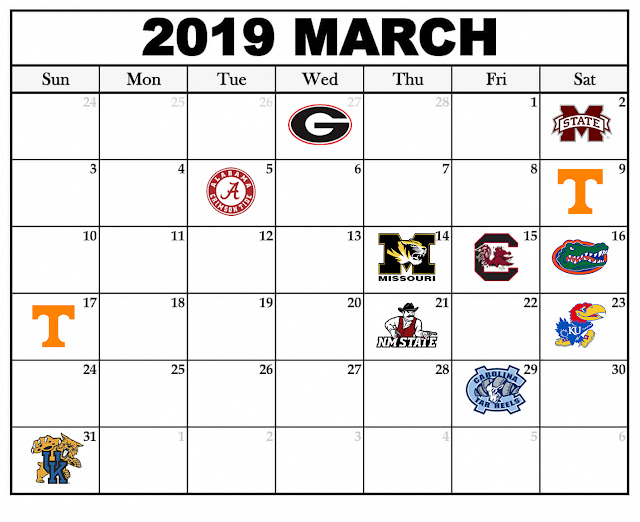 Yeah, I threw UGA on there because that is where the streak started and I wanted to just reiterate the fact that we swept the Bammers, the UGaly’s and the Vols in the same season.

Typing this is bittersweet. I am so happy and proud of these Auburn men but I cannot lie as I sit here in the Minneapolis airport on Sunday my heart aches that I pass on attending a Championship game.

My Tigers mean to much and I support them first before I support anything or anyone else.

I will close with thank you for a season that defines Auburn Basketball and sets the bar for every Auburn player that takes the court wearing the Orange, Blue and White from now on, YOU did that! I can only hope next year’s team embraces what I know this team did embrace; If you don’t believe In yourself, who will? They did and we all got to come along for the ride. Now we all need to continue to believe and embrace the "valuable pain" - come back and finish it.... it is not how hard or how many times you get knocked down that matters... it is getting back up and what you do that matters. Make it three tourney's in a row! I BELIEVE!

War Eagle Family, much love and it is always great to be an Auburn Tiger. We love Auburn. So blessed.

Well said. And that Clemson Tiger is disturbing .

Couldn’t have said it better or agree more. Thank you and War Eagle always!!!!!

Thank you Unknown and Martha!Yes the Clemson Tiger is the stuff nightmares are made of. I fully expect him to make a cameo in a horror movie sometime soon! :) War Eagle to both of you and thank you so much for taking the time post a comment. #Blessed to be an Auburn Tiger!