Prayers 4 Players- What is it all about?


Be joyful in hope, patient in affliction, faithful in prayer. Romans 12:12 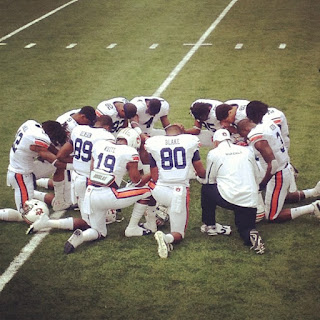 This post will stray from the normal posts on this site. You may have seen some tweets hashtagged #prayers4players and wondered what it meant. I teach at a high school in rural south Mississippi although I live in Alabama. About 9 years ago, we had a football player killed in an incident. Before the 2012 season when Auburn football players were killed at a party, I knew it was going to be a rough ride for the Auburn football team. It took my school and the football team years to recover emotionally. The first game of the next season, the opposing team took a knee on the first play to honor our player and our boys were emotional wrecks after that. The player was in the 11th grade and highly recruited.  It was by far the worst day and week of my teaching career- even worse than 9/11. I knew our Auburn players were going to need prayer.  I was praying for the friends and teammates of the players when God spoke to me about what could happen if someone prayed individually for each Auburn football player at least once a week. I had previously prayed fervently for Zac Etheridge. If you were watching that game on television or were at the game, then you probably did as well. God moved so powerfully with Zac that it sparked a thought in my head. Isn't it funny the way God speaks to us sometimes? The way God spoke to me was unusual because He used the movie Facing the Giants.  The 2012 season was rough, but during that season, there were 5 people who agreed with me and committed to praying for the players as well. My intention was never for the outcome to be wins on the football field. I believe that we have prayed protection over our players for many situations. We have interceded on their behalf. As the group has grown, we have added sports. Over the years, we have developed a mission statement and a focus verse:

And this is my prayer: that your love may abound more and more in knowledge and depth of insight,  so that you may be able to discern what is best and may be pure and blameless for the day of Christ, filled with the fruit of righteousness that comes through Jesus Christ—to the glory and praise of God. Philippians 1:9-11

Over the last few years, we have had many more people join the group. We have added several sports, including football, basketball, softball, baseball and gymnastics. I am praying that we will eventually have enough people to add more sports. Our players are human beings- they face incredible issues daily. It is not just on the field. They need prayer warriors going before them. My hope is always that it will make a difference in the locker room and in their lives.

We currently are in need of a few members. If you are interested in praying for the players, you can message me on twitter @tatershell or email me at christyg1119@gmail.com

If your experience has been anything like mine, it will change you. I found that once I started fervently praying for the athletes, it became much harder to criticize them. If you are unsure or hesitant, please feel free to contact me with questions. There is not a lot of pressure. If you just want one or two, we can do that too. What is required? You will get a list of players. Those will be "your players." We ask that you commit to praying for each player at least once during the week. Some of the things that we pray for with them is protection and safety during practice and games, for them to be a good influence on the team, for their families. Sometimes we follow the players on social media and connect with them that way. They will occasionally post about something specific that they are going though. I try to send mine a message occasionally that I am praying for them. If you feel you can only do a few players, we can work with you on that. The current list is about 5-7 football players apiece. Some folks participate in all the sports and others just want to stick with football. That is ok, too. My hope is that eventually we have enough who will pray for all of the sports teams at Auburn. We also have become "friends" with one another and often we will email the group to ask for prayers of each other. One of my favorite songs is the song "How Great is Our God" by Chris Tomlin, especially the version where it is in Spanish and English. It reminds me that one day we will all praise God and the language barrier will not matter between us. If you are interested in being a part of this ministry, please email me or message me on twitter.

If you have not ever watched Facing the Giants, I will refer to it often. This is a scene that really spoke to me. It is the part where Mr. Bridges is touching all of the lockers in the school, praying for each student as he passes the locker.

Posted by tatershell at 2:52 PM